Everyone went through that high school crush. Even, if you went to an all boy or an all girl school. You just had that someone that you could not get out of your mind and you were stuck watching him or her spend his or her finer years with someone else. Whether if you were an obsess nut or a closet crusher, you had someone and it is a natural human thing. The only thing to do is to prove that you are worth their time.

Juliet was the quiet girl in the class. She was always around her friend who would always start the conversation and ended it as well. Juliet was your girl next store cutie. I unfortunately got to become her go-to-guy who was only there to listen. I know many others had been stuck in this same situation and called it the “friend zone”. I eventually got to personally hang out with Juliet and dragged her to random places such as to bad movies and to school and such. Juliet continued to date the same guy. This guy was portrayed as your top of the line douchebag. He was always jealous, always fighting, and occasionally cheating. I always hoped to save her from that life. Until one day I finally did.

A couple of years after high school, I took Juliet out to a bad movie. It was so bad, I tried to recall what it was and ended up staring at the computer screen for about ten minutes before finally giving up. We went back to her house and sat on her porch. The sun was out and the weather was beautiful. Everything was going so well. Even my confidence was at an all time high, which would explain my next action. I kissed her. She was obviously nervous at first but quickly gave in. The first week was the greatest thing out of our friendship. We were inseparable.

One day, I took her back to my parent’s place where we would make out hours on in which eventually, things got hot and heavy for us. Then she said something that completely caught me off guard.

“I have never had sex with a guy before. “ Juliet starts.

“Wait, you have been with dude all this time and he has never made a move?” I had to ask.

“Well there’s something I have to tell you. He is actually a she.” Juliet confesses. 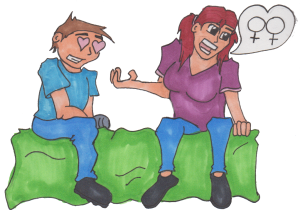 Obviously, things grew weird between us, but it didn’t stop us from hanging out. As a matter of fact, it sort of went like this.

We ended up going to our local pizza joint. As we were sitting at the window-barstool section, staring out into the busy city from our seats.

“Well, girls either have one of two things going for them. They either have big boobs or a big butt.” She begins explaining a woman’s anatomy to me.

“I don’t really judge by that. That’s lust. What’s the point? It’s the same Vagina?” I respond.

“It doesn’t roll off the tongue like ‘pussy’ does.” She says.

“So you like saying pussy more than Vagina? Don’t you think that sounds a bit vulgar?”

“Nope, I think it’s more hot.” She defends her opinion.

I guess my-one was sort of different.